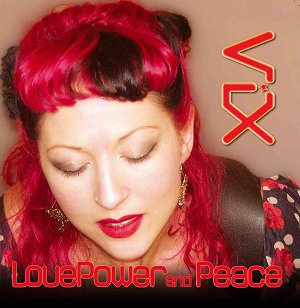 Despite the title, Vix is no hippy. Rather she was a member of all-female band Fuzzbox and now fronts another such band. This is some of her solo material and it’s pretty great. It sounds polished, but not edgeless and has great melodies.

Vix’s vocals sound amazing on the opening title song and that is pleasantly poppy. Little Sister shows off Vix’s beautiful voice and is done in a country style. It could almost be a lost Kirsty MacColl song.

Seduction Song is a neat Spanish-tinged song with a suitably sultry vocal. It’s all nicely tongue in cheek too.

It’s a compilation of Vix’s solo adventures, but it comes together well and is a good, fluffy pop record.

Vix continues with her band Vix’n’the Kix and hopefully an album will follow soon.