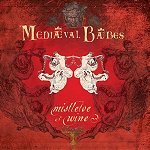 The Mediaeval Baebes was founded in 1996 by member Katharine Blake. Here’s the description taken from their website: The Mediaeval Baebes are 8 female singers/musicians, from six different countries, currently based in London. They perform music influenced by the Medieval period and sing in ancient and modern languages.

The music is really quite unique. Part Celtic, part Ren Fest, and part reminiscent of the music I listened to as a child in church. Lovely harmonies. Soft, not overpowering music that just blends very nicely with the vocals.

This is a nice collection of Holiday songs. You may recognize opening track “The Holly and the Ivy” but it’s done in a different way than I’ve every heard. Very full rich and lush.

This is good to have on in the background while you’re eating Christmas dinner or just relaxing with a book and a glass of wine.

I’ve heard some complaints that many of these songs appear on other CDs of theirs as well, so if you’re a fan of theirs and already have all their other CD, you might not appreciate that aspect. I did a quick count and 5 of these songs are on the one other CD of theirs I have (The Rose, see the link to the review on the left).

Then again, if you’re a huge fan and you have to have everything, you’ll need this too.

But if you’re like me, and you only have one of their CDs, like their stuff, and would like a holiday themed one, this is just right.