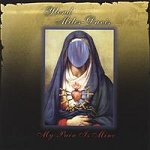 This is certainly a unique album. It’s at once hard rock with wailing guitars, but also swoopy atmospheric dream pop. Ylond has a voice that makes me think Victoria Williams meets Jill Tracy especially on track two, Tommy.

The songs are pleasant, ambient tunes with some good instrumentation. The songwriting is melodic, without sounding too mainstream. The lyrics paint some strange, lovely and disturbing visions.

This is a good CD for chilling.

From reading her site I’ve learned that she helps out Animal Shelters with donations and trying to educate people. This I find fabulous. So buy her CD now!

Stand out songs: “Tell me Your Name” (spooky and cool vocals), “Atmosphere” (shows her voice well) and I also like “The Refusal”

Minor quibble about the packing…why make an effort to make the cover so great and artful and then slap what looks like (and appears to have the quality of) a passport photo on the inside? At least the music is consistent.

Rating: 5 Stars
Comment: Ylond is one of the most spiritual women in the world her music is something that releases her energy for the beings of this earth. Understanding her sound is understanding her SOUL!
name: G.M. on Friday, May 13, 2005

Rating: 5 Stars
Comment: excellent Cd, cmon the photo isnt that bad. Please keep in mind this is a independent artist that put the funding out for this project by herself. Please support ylond and buy the CD!
By joe on Saturday, November 27, 2004

I would have written to you personally, but since you didn’t include you’re email address I guess I have to do this here:
Almost every CD I review is an independently produced CD where the artist had to come up with the money on her own. I realize this. I know it’s not easy. It was just that I felt (remember, this is only an opinion) that the photo detracted from the whole feel of the packaging, which is gorgeous for the most part. And I’m not saying anything about what she looks like (She’s cute), simply that it looks like it was taken by one of those photo machines at the mall. That’s all. That’s why I called it a “minor quibble”. I agree wholheartedly that the CD is great and that people should buy it! ~Amy

← Album Review: Miles Away by Jen Gloeckner
Next Post →