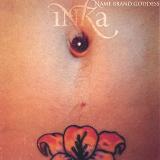 Inka has made a charming debut. The mix of electronic beats and acoustic guitar on “Ecstasy in the Fire” suits the spiritual theme well. Inka’s singing is earthy rather than ethereal which is a nice thing.

“John Lennon Jesus” has an intriguing title. The song is atmospheric and sweet. Inka sings of her musical heroes and seeks guidance from Lennon in particular. The songs organic vibe will endear it to many.