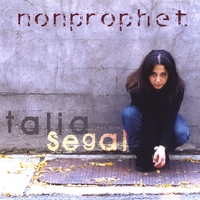 I think Talia Segal has put out a very nice little EP. It’s short, which is too bad (but I realize if it were longer it wouldn’t be an EP, doh!). She has a nice young presence. She reminds me of Michelle Branch and Vanessa Carlton when they first came on the scene.

Her voice is youthful and sweet, but you can hear that there’s an edge and as she grows I’m sure her voice will mature as well. It’s great now, but it will be fun to see how she grows.

Her songwriting is very poppy and radio friendly. After one listen these songs seem like you’ve known them forever. Very catchy. Especially “Pretty Little Lies” I can totally see that being played on the radio.

Of course I’m sure every reviewer is going to mention “Anna Joy”. It’s a very cutesy (hand claps and background cheers) ode to the high school cheerleader that our hero has a wild crush on. It’s well done and really makes you feel her conflict with wanting a girl. Well maybe not her conflict within, but knowing that others won’t approve.

This is a nice start for Talia Segal and I hope to hear more from here in the future.

Track Listing
Listen to track samples
1. Intro
2. Been There
3. Boy Wonder
4. Pretty Little Lies
5. You Told Me So
6. Anna Joy