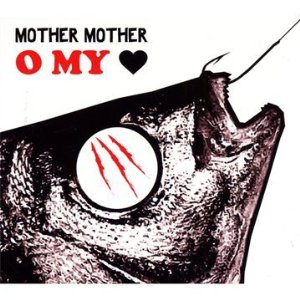 Naturally, it is always difficult to review a foraging and sun-kissed indie album from a Canadian act, without considering Arcade Fire. Mother Mother, in the title track, do have a lush and uplifting touch akin to Winn Butler and co, at times, but there’s also a splattering of Hal and The Delgados, as well as some yearning interludes and a touch of desperation is also chucked in for good measure. This second album soon shapes up into a ranging release, toying with emotions whilst retaining some playfulness.

In Body, a slight falsetto hold grips onto the vocals of Ryan Guldemond that is stretched out when his sister Molly joins in the act. Creating a beleaguered, yet strangely comforting pop epic that builds from an almost eerie, grinding bass led intro. This is also returned to for a bluesy outro, sandwiching the reflection and heart with grit and grime. It’s juxtaposed by a tender and slow yearning ballad, Try To Change. That sees the two vocalists digging deep for some heart-wrenching, covering a thorny topic that is the futility of trying to change. Molly’s vocal versatility is laid out to bare, when she provides for a mild soul infusion towards the end of this engaging snippet.

Through Ghosting, Mother Mother instils some spindling folk to slow things down, providing for some meditation and respite, as Ryan’s vocals unveil a positive and warm streak. It is another track demonstrating that backing vocals can add potency and pull to a song. This element is certainly no mere afterthought to this Vancouver quintet. The racing Placebo veined instrumental build up in Hay Loft, initially bolsters a track that soon morphs into a snazzy NU rave and New Wave conjoining razzle-dazzle. A forage through history shows that the true genius of pop is in the ability to deliver simple melancholy with melodious catchiness and sincerity. This is easily achieved through Arms Tonite, whereby Molly’s stern, but comforting vocal touch starts to take over. She indulges in a warming, yet darkly blurred exchange with Ryan. Easily giving The Magic Numbers a run for their money and somebody-else’s too!

Mother Mother have produced one of the freshest pop/indie conjoining albums of the decade so far and, it will take something special from the earlier mentioned fellow Canadian, euphoric pop darlings to top this.