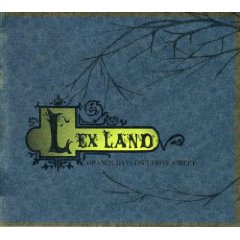 God, I love this record. You have no idea. I love everything about it. The album art, the name, the lead vocals, the melodies, the musicianship, hell, I love the font used on the liner notes. This is MY kind of record. Once in a (great) while I have that thought, ‘why do I keep doing this?’ then I get a record like this and I remember.

While this was in rotation (as opposed to now, when it’s all I can listen to) each time a song came on that caught my ear, I look at it was from this record.

I love the vocals here. At times she reminds me of Polly Paulusma. She is heavy on the sses and has a slightly little girl sound (especially noted on All We’ve Ever Done) . As a whole the record also reminds me a little of Two Loons for Tea. But these are just moments, glimmers of familiarity, for the most part, Lex Land is not like anything else out there.

This woman can craft an incredibly beautiful song. The melodies as well as the lyrics.

Some kudos also go to her bandmate, Peter Adams whom she credits “on all things black and white and buttony.”

I can’t even honestly choose a few songs that stand out because they all do. They stand out among all the other albums I’m listening to right now (about 40) and that’s saying something.

However, right now, Could have Had Me is playing and the rolling, crazy piano is giving me shivers.

I will be keeping an eye on this artist. She makes me wish I had a record label. I’d sign her in a second.