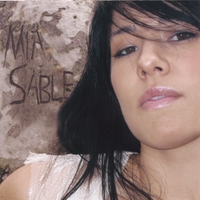 Mia Sable’s debut is a very nice record. She has a lovely voice and writes great songs.

“My Mistake” is especially strong and moody. Sable’s vocals are rich and nuanced.

“I Don’t want to” is a kind of anti love song, and bears a slight resemblance to early Fiona Apple. She has the same soulful delivery and gift for creating strong melodies.

“A Long Distance” is very upbeat and radio friendly but with a dark heart. Sable sings is with a knowing distance.

“Secret Code” is intriguing, a trip hoppy song that’s very expressive. “I can taste your heart between my teeth” sings Sable, and the poetic approach works.

Her record is one to cherish.

← Kerry’s New album is out!
Album Review: The Collection by Cynthia Basinet →