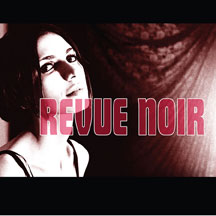 Nicki Jaine released the astonishing debut “Pidgeons and Other Curiosities” and then she met Sam Rosenthal, founder of ‘Black Tape for a Blue Girl’. The result is cabaret group Revue Noir. The single is their first record.

“Gravediggers” is pure melodrama, Jaine’s smoky voice caressing each syllable while the music is rapt with creepy undertones.

“Amsterdam” is revisited from Jaine’s debut and it’s a torch ballad worthy of Jill Tracy.

“A Girl, A Smoke” is equally lovely, Jaine sounding like it’s three am in the bar at the end of the universe. Her world-weary intonations are strangely invigorating.

Comments:
Rating: 1 Star
Comment: Sorry-Jaine sings-recites in a painfully bad English accent (she’s from New Jersey) and affects a Marlene Dietrich style which is terribly affected. All I can say is “ewwww…”
name: Brian on Friday, December 2, 2005