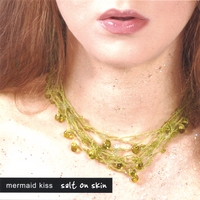 The first album by Mermaid Kiss was stunning, since then singer Evelyn Downing has left the band. New singer Kate Emerson has joined and on this EP, there’s also vocals by a third singer, Kate Belcher.

Emerson sings on opener “The Blushing Bride”. It’s half progressive rock and half folk standard with neat guitar by Paul Davies.

“Walk Away” with a lead vocal by Kate Belcher is more fragile sounding but it’s still a superlative song. Its jazzy tone is well thought out.

“Hollow” is one of Evelyn’s songs and she takes the lead in a way that makes me miss her. The song rests on shivery piano and the stunning forlorn vocal.

“Human Zoo” is a masterful creation, the bands creating a spooky yet compelling sound. I’m reminded of Pink Floyd.

“Volcano” sees Downing bow out at least for now and her heart-rending singing the dark mood works well. Despite the changing lineup this is a cohesive listen.

Rating: 5 Stars
Comment: I’ve bought a copy of this CD and the production is incredible – some of the best I’ve heard from an independent band. There are layers of sound you just wouldn’t believe, especially on Human Zoo – try it through headphones. I can only assume lala’s comments were based on the low-quality samples. This music really is a breath of fresh air – varied in style and very original. And it’s rare enough to find any natural sounding female vocalists these days and on this disc you get three in one band!! Try the real thing – get the CD – at under $10 it’s a gift.
name: rosa on Friday, March 24, 200

Rating: 5 Stars
Comment: i think that these guys should quit while there ahead! some beautiful ideas but mixing and production is so simplistic it leaves the “ideas” meaningless , bare and almost unjustified. walk away and hollow are great tracks,and the lyrics are great, …but the mixing is awful and lets these songs and the whole album down !
name: lala on Thursday, March 23, 2006