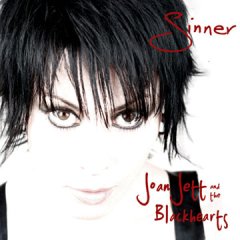 Well, I liked Joan Jett back in the day. I didn’t actually know she was still making music. I was never really into real hard music, but I liked her radio stuff, just like everyone else did.

The opening track, “Riddles” has a great theme (IMHO) and the end of the song which has a clip of our current leader stumbling over one of the most well-known clichéd phrases in our language is downright scary. However, I find the melody a bit trite and boring. The more I hear it the less I like it. But I am still glad she wrote it because of the theme. I want everyone to hear it and sing along.

In fact, I’m not sure if Joan Jett was ever really known for her melodies. They’re all pretty repetitive, but they’re sure played with enthusiasm! That’s got to count or something, right? Some are stand outs, but mostly they all sound very similar to each other. But I guess if you’ve found your niche why mess with it.

The great punky-rock style is still there and it really is fun music. She is the master of this genre, no question. Plus she’s still a hottie.

“Androgynous” is a cover of the old early 90s hit by The Crash Test Dummies (I always loved them *and that song). Jett’s is a nice take on it. But it’s so different from all the other songs, it stands out, for better or worse.

If you have been a Jett fan all along I don’t think you’ll be disappointed. If she’s new to you (that means you’re either very young or have lived in a cave) and you like punky strong grrrl rock you need to school yourself on Joan Jett.

I think I like “Five” best right now. It’s most reminiscent of her old stuff and makes me nostalgic.