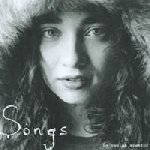 Regina Spektor’s “Songs” is a sparse recording with just her voice and piano. It’s more than enough to make these songs interesting though. Regina’s lovely voice and piano come to their right here.

“Oedipus” has clever words and an appealing melody.

“Prisoners” is intense despite the low-key instrumentation. Regina Spektor’s words of the prisoners’ hard life and quirky vocal delivery is very affecting.

“Consequence of Sounds” is a sweet meditation on the art of creation. Spektor’s voice at times takes on a resemblance to Björk’s.

“Aching to Pupate” is a capella and Spektor uses her voice like it was an orchestra.

“Songs” is a very nice record that deserves to be heard.

Note: this was originally posted on the main site and we used to allow comments there, I’ve preserved them here…

Rating: 5 Stars
Comment: A friends mom was playing her music in a car on a road trip and i just couldnt get enough of it its fantabulous ,stunning m type of music to a t it brilliant her lyrics and just everything is so beutiful
name: Amanda on Wednesday, December 13, 2006

Rating: 5 Stars
Comment: Regina Spektor is an AMAZING musician. Her voice is soft but it almost stabs you. She’s definitly my new favorite.
name: Stephanie on Tuesday, November 1, 2005

Rating: 5 Stars
Comment: Regina’s “Songs” has been pracically glued into my cd player and I agree with the “giving of the 5 stars.” Well deserved. She has such a diverse mixture of songs and they are all very beautiful. “And History books forgot about us, and the Bible didn’t mention us, not even once.” Best line I’ve heard in a long while.
By Annalise Aakhus on Wednesday, October 19, 2005

Rating: 5 Stars
Comment: I was haunted by this album the first time I heard it, and it’s power hasn’t subsided for me in the past year. Apparently “Songs” was made in one afternoon when a friend with a studio told her “I’ll give you some studio time and just come in and record as many songs as you can in the couple of hours.” So it’s just Regina and piano, nothing else, and a more brilliant, odd group of songs you couldn’t ask for. I prefer this album to her newer, more commercially ambitious SOVIET KITSCH. “Songs” is like a work of art, with mostly small, quirky, sometimes ambiguous little masterworks. I haven’t heard any other new album in the past couple of years that affected me as deeply as this one. I recommend it without reservation to anyone who likes their music unique, personal and unfettered by convention. It’s kind of hard to track this one down though, it seems. You can find the new CD easily enough(“Soviet Kitsch”) and I’ve seen her way earlier one in stores occasionally. But I have yet to see SONGS for sale anywhere…
By michael on Sunday, October 16, 2005

Ed. Note: You can get the CD online at CDBaby using the link above (in the left panel) or [Click here] This album was released independently, which means that she has no distribution so it will not be found in stores unless a record label buys it and re-releases it…or you happen to find it in a used bin somewhere. This is why CDBaby is INTEGRAL to getting GOOD music in the hands of those of us who appreciate it. Don’t be afraid to buy online, they’re a great company!

Rating: 5 Stars
Comment: 5 stars for sure. best album i’ve heard in a while.it is pure no frills but, not lacking anything either..samson is incedibly magical. i love.
by AmeLia on Monday, February 21, 2005

Rating: 5 Stars
Comment: I’m sure it’s five stars. I haven’t listened to this album but i’ve heard soviet kitsch (don’t think ive spelled that right) well anyway that was fantastic. I am currently trying to find the guitar tabs for her song that’s like “i kissed your lips and i tasted blood dananana dananana” that song rocks my socks
By Ginger Alleyne on Friday, November 19, 2004