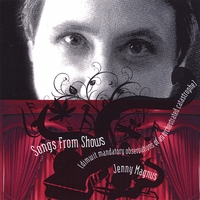 I kind of knew this record would be a little, shall we say, from left field, judging by who submitted it to me. It was sent from Jon at Uvulittle Records, who represents Stephanie Rearick. I’ve known Stephanie and Jon for years and I really enjoy them. But their sound and taste has never run anywhere near the mainstream. With that expectation, this record does not disappoint.

I originally thought that since these are songs from shows, she probably didn’t write them. Upon further investigation, I see that she has co-founded at least two theaters and is a co-curator of one. I have since learned that these songs came from shows produced there.

Jenny Magnus’ voice is odd. I don’t say that disparagingly, I just don’t know how else to describe it. It’s deep and strange. She also employs the trick of many voices singing at once, sometimes in unison, sometimes in harmony, sometimes singing different things altogether.

The melodies are disconcerting, for lack of a better word. Certainly not predictable. When you’re sick of mainstream melodic pop, this would be a fabulous palate cleanser.

The lyrics are, as you might imagine, very descriptive. Being a theater person she’s got a good way words.

Frank’s Room has a lot of extra noise, people whoo-hoo-ing and clapping.

Dormant is cool. Loud drumming and hummy singing. Lots of minor notes. I like this one. Still weird, but cool, almost tribal.

Playground is spooky but playful at the same time.

I like weird, but this is perhaps a little too weird for me…unless I am in the right mood. It seems like it’s bordering on what I call Avant-weird. Weird for the sake of being weird. But maybe I’m just not deep enough in to take it at its true value. I think those with an open mind will like it. Fans of Rearick and theatrical type stuff will find this very interesting and appealing. I am definitely impressed and intrigued!