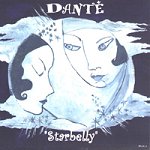 This is the third release from New York’s Dante which is both the name of the lead singer and the band name. The other band members are: Huss (guitar/vocal), April, (drums), and Josh D (bass).

Theresa Dante is a talented woman, no doubt. She has studied classical music since she was a child and has a degree in music from NYU. She has a low smoky cabaret-type voice. The music is a bit jazzy, a bit rock.

The songwriting is interesting, and far from ordinary. But it’s also “sticky”. By the second listen it’s already familiar.

“I Believe” has a cool bass line.

My favorite track is “Empty Streets”. It reminds me of Siouxsie Sioux. On this song the production is just right, in my opinion.