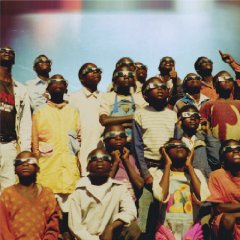 Apparently, Koufax have been around for years but the only constant is lead singer and songwriter, Robert Suchan. Suchan has a perfect rock voice.

They’ve been criticized in the past for political statements. But I honestly don’t see anything wrong with writing and singing about what you believe in.

Any Moment Now is cool. It’s got a good driving beat and a nice tempo and his voice is cool. (I learned after writing this that that song is the single)

Facsimile is a lesson in ‘saying a word over and over again makes it sound ridiculous and wrong’ but it’s a fun song.

California Taught us Well is cool. I really like his voice on this one.

This is a consistent, solid release. I’d say this incarnation is one to stick with!

[Koufax Official Site]
*as of today, their website has not been updated since 2004 and it just consists of a news page. However, their MySpace page is up to date.
[Koufax MySpace]

← My Brightest Diamond on the Roof
Album Review: Poetry & Rhyme by Helen McCookerybook →