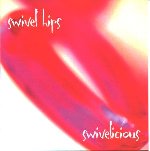 When I listen to this recording, it feels like I should be in a club or bar with a beer in hand and dancing my arse off to a live band.

This is one of those bands that you just know is fabulous live. That is not to say that this CD isn’t good, it’s just that it’s missing that special something that you know the band has, it has just not been captured on the disc. It’s hard to do; it’s rare to find a CD that does it well.

That being said, this is a fun CD with some good jazzy pop songs that will make you want to jump around. With song titles such as “Hottie” and Candyland” you know this band is in it for the sheer fun….and fun it is. The songs all have great melodies and the musicianship is outstanding.

Swivel Hips is a very polished act. Great musicians, great voices and the knack for having a good time.