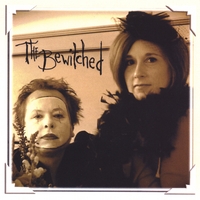 Mary and Eric make up The Bewitched, an aptly named hard to define duo. They weave an intricate web of music.

The folksy leanings of The Dark open and sets a pace that’s hard to predict.

Selling Salvation is a jazzy number about religious bigots and as such it’s great.

The ep closes with an atmospheric take on the traditional Unquiet Grave which is beloved of Goths all over due to its dark theme.

The Bewitched are all over the map, but their excellence is consistent.

Interesting (to me, Amy) note: This band is from Minneapolis where Collected Sounds originates, but was reviewed by Anna Maria who is all the way over in Sweden!