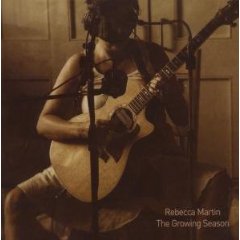 I knew I’d like this if the cover was any indication of what was inside. The record is filled with luscious well written folky jazz (or is that jazzy folk?) songs. A pleasure among the many albums I am reviewing right now.

Rebecca Martin has a soothing, comfortable vocal style that I could listen to all day.

I like that it’s guitar based, but there are lots of other sounds in there, not least of which is xylophone! Well, it’s likely a keyboard, but it sounds like a xylophone to my untrained ears. It adds a great depth to the tone of the recording.

Lullaby is great. Piano and voice in unison, nice minor keys. Yep, this got me several times. My favorite by far (though all the songs are great).

I also like: The Space in a Song to Think, but again, they’re all great.

← New Sarah Fimm tunes
Album Review: An Evening Out of Town by Knitting by Twilight →