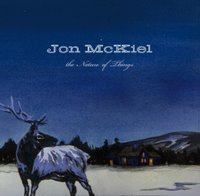 Well, of course I like him, he’s Canadian. There is something about the music that comes out of Canada that immediately (and almost always) appeals to me. Maybe it’s because we’re so close, location-wise. But many of my favorite artists are Canadian. Thought I’ve never even been there, I have a love for the country and its inhabitants and especially for the music that come out of there.

Jon McKiel’s voice sounds a bit like Adam Duritz and in fact the songwriting is similar to Counting Crows too, only I like it better. Not that there’s anything wrong with Counting Crows, this just is newer and fresher and with more of an Indie Rock feel.

He plays guitar well and uses the finger picking style I like. The songs are heartfelt and his voice really adds to the emotional quality, almost pleading at times. Most the record is slow laid back rock with a bit of an Americana feel, but there are some more rock-ish songs here too.

I like this. I think it will end up in my personal collection…and not many guys do (at least not many that are submissions to the site). But this has a very professional feel to it.

Stand out songs: Sleep Cities, War on You.