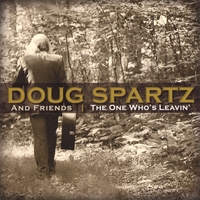 I tend to not like songs or albums that use partial words (leavin’ instead of leaving) because it generally indicates country. But there are exceptions. This is one. While Doug Spartz’ Americana/Country style is not a genre I listen to with any regularity, I can say this is a really good album.

On songs such as Forever Young his great gruff voice is in wonderful contrast to his beautiful lyrics.

I especially enjoy Risky World which is a lively (more rock) tune filled with opinions about the world today. You don’t usually see country protest songs. At least I don’t. It’s refreshing. Plus it has a great fiddle line.

I generally don’t like talky songs, but Talkin’ Americana Blues is really fun.

Upon repeated listens I like this even more. I just love his voice. All 20 songs are catchy without being too mainstreamy or twangy for my taste. Plus he’s a fellow Minnesotan! There’s a religious bent to some of the songs which may turn some away, but I’m sure will speak to others.

Check this one out for sure.

← Album Review: All Directions by the Donnis Trio
Vote for Gregory Douglass! →