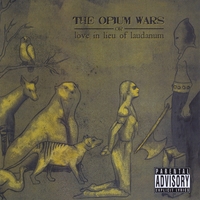 Album Name: The Opium Wars Or Love In Lieu Of Laudanum
Artist: Joy Shannon and the Beauty Marks
Year/Label: 2009 / Independent

Joy Shannon’s record with her regular band is different from the one with the Offering, more organic but no less moving.

Opener Ghost Song features the singer’s angelic vocals set against a mournful melody. She gets her point across without resorting to big gestures.

Thylacine sees her wishing for an extinct animal to return making it a symbol of mother earth. The album’s front cover sees a representation of Mother Nature on her knees praying for the lives of various animals at the feet of an executioner, who’s meant to be symbolic of man’s destructive ways. She avoids easy cliché and gets a moving song out of the problem.

She covers Nick Cave’s  John Finn’s Wife and puts her own stamp on it. Her voice is really lovely here and the band follows her lead well.

Woman’s War Song is soft despite the title, yet it intentions are serious. Shannon’s vocals are lovely and expressive as ever.

This is an inspired and bold record.