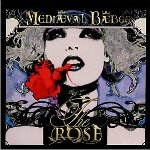 From the opening chants (in Gaelic) and pulsating percussion this recording is very atmospheric.

The music is transcendent, one minute I feel like I’m at the Renaissance festival (“Glass Window” and “Lick the Maypole”), the next I am in church (“Slay Me Suddenly” and “There is No Rose of Swych Vertu”). conjures up visions of faeries and swirling colors and shapes. At least that’s why I “see” when I listen.

The lyrics (not that you can, or need to, understand them most of the time) are taken from older, already published works. One (“The Circle of the Lustful”) is from Dante’s Inferno but mostly they come from poems or other works from the 16th century or before. But the music is written by the Baebes led by Musical Director Katherine Blake who is also the founder of the group.

Through the CD seems like an endless stream of beautiful voices and haunting melodies there are some tracks that do stand out for me. Among those are “The Snake” and “Blow Northern Wind”.