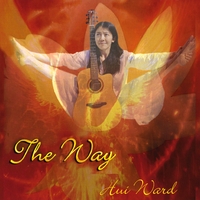 Upon first listen I wasn’t sure what to make of this one. I guess maybe I’m still not. Her voice is sort of odd. It has a cutesy quality. It’s also produced with a lot of reverb or something on it (autotune? vocoder?) and sounds sometimes like the electronic instruments that are also playing. It somehow sounded out of place with the Asian inspired music.

But once I listened to it alone (as in, not shuffling with other stuff) I think I ‘got it’ a little more. In it’s own world it’s actually quite nice.

The voice, once you get used to it, is pleasing and does actually go with the music nicely.

The music, as I said, has an exotic feel. There are a lot of instruments on here that you don’t hear in regular pop music.

The songs are pretty really repetitive. I will say, with all of them (but one) clocking in at over 5 minutes, I think they go on at least a minute too long in most cases. I’d have cropped them a bit. I really like the melody of Messenger.

But it’s a good mood inducing record. I’d say it’s more for background music, than for listening with headphones or something.

It’s not mainstream and not for everyone. But if you have an open mind and enjoy world music you should give this one a listen. It’s unique and interesting.