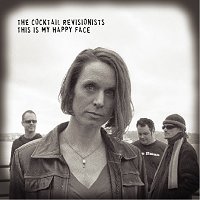 Album Name: This is My Happy Face
Artist: The Cocktail Revisionists
Year/Label: 2006 / Independent

I knew I’d like this right off the bat when I saw the cover photo and read the title. I thought, this is my kind of humor.

We open with an appropriate song and title, “The Bar is Open”.

These songs are melodically easy, breezy, Brit pop-ish. They range from jumpy fun pop (This Little Hell) to even sort of maudlin (December).

There’s even a bit of a late 60s psychedelic feel such as on “Skin And Bone”.

“Ode To You” is probably my favorite. I love the intro/bass line (played on keys!)

So there’s a good mix here. It’s a nice combination of sounds. Good for any mood. I dare say, something for everyone.

Leslie Kooy’s vocals are a good match for the musical style. There’s nothing terribly flashy about her voice. Just a good solid part of the whole package. She’s on key (trust me, this is not as common as you might think, sadly) and sounds like she’s having fun.

The rest of the band is equally skilled, though flashier than the vocals, especially on “Arbusto”, where they really get to rock out. I actually think that might be my favorite. But I’ve changed my mind several times just in the witting of this review so that could change again. That’s good; it means I like all the songs in their own way.

I think you’ll have fun with this one too.