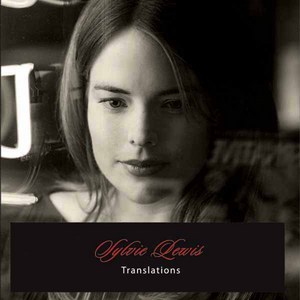 As ever her lyrics are literate and ponder the possibilities of language and love. Her sweet voice is more whisper than shout.

Happy Like That offers a neat little reflection on happiness and the perception of what it means to be happy. Lewis floats delicately on a gentle musical backdrop.

Say in Touch continues the fascination with language

And Of Course Isabel is addressed from a father to his estranged daughter. It’s a sweet song set to a piano accompaniment.

Old Queens, Monet and Me looks nostalgically back at better times and tugs at the heartstrings.

Sylvie Lewis has made a lovely album.

Sylvie Lewis’ voice is so sweet. It’s clear and has a great tone.

There is a really sweet story on the back cover that begins, “The Japanese girl breaks my heart every morning…” it’s so nicely written and so heartfelt I got a little misty reading it. It sort of sets the tone for the record.

The songs are piano based while slightly bass and drums heavy on some tracks.

If It Don’t Come Easy will have you hooked by the first few drum beats. Such a catchy fun song. Nice backing vocals.

Just You is lovely as well.

Cheap Ain’t Free is reminiscent of those late 60s early 70s pop tuens. I love it.

The booklet is designed so that each song is represented within by a little story. Sometimes it’s clearly about the song, sometimes maybe not. But it’s always entertaining. This is another reason I like to have the actual CD in my hand, not just the mp3 or whatnot.

This is a really great record and one I will be listening to for some time yet.