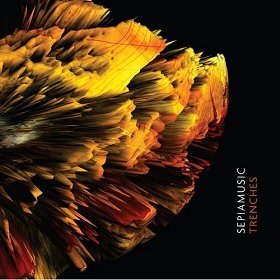 I’m ashamed it’s taken me this long to write about this one. Because I knew from the art that I would like it. And ‘like it’ is putting it mildly. Here’s another thing, I didn’t realize until I was putting the finishing touches on this review that they’re Danish! They also share a record label with Bittersweet.

The name of the album as described by the lead singer, Erin Chapman: “To us, the meaning of ‘trenches’ was the idea of the spaces in between – small cracks and refuges from big emotions, but places that one must eventually leave to face battlefields of reality. ”
This reminds me of the recent Sheila Nichols album, bardo. Sort of the same idea.

It’s really pretty, just like I thought it would be. Ambient, lush. But not really sleepy. It’s like Tresspassers William only with more of a rock edge. The songs are quite complex and there’s a lot of layers and a lot of things going on.

Erin Chapamn’s voice The female lead is also wonderful. Dreamy and comfortable sounding.
Also singing on the record is Michael Adler, who is the producer as well. His voice is also lovely and very soothing.

This is a great chill out record. Do people still say ‘chill out’? Well, you know what I mean. It’s really great and my apologies to the band and to you for not getting this out sooner. I’ve had it since April for sh*t sake.

So get it already.