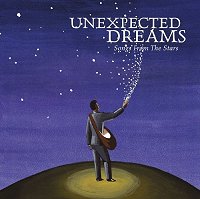 I don’t normally review cover CDs, one of the criteria is that the artists write their own material. But when I got the email about this CD I couldn’t resist. I confess, the main reason I got it is I wanted to hear Jennifer Garner. I adore her.

This is sort of a lullaby CD. The songs are all sleepy time ballads.

The record opens with Scarlett Johansson singing “Summertime” from the play Porgy & Bess. I’ve always liked that song and as it turns out, this is the best track on the record in my opinion. Scarlett has a lovely voice with a very professional quality.

Ewan McGregor’s song is also great. We all knew he could sing when we saw “Moulin Rouge”. His voice is very soothing. He can sing me to sleep anytime.

The sad surprise is Jennifer Garner’s track. As I said, I adore her. I used to have a big celebrity crush on her husband but I just couldn’t be jealous when I found out they were together. In fact, I called it long before they announced it. I knew when I saw them together on “Dinner for Five” that he was, at the time, with the wrong Jennifer. But I digress…I do not care for what I call the opera voice and unfortunately Jennifer’s bordering dangerously on it. She uses a lot of vibrato. I’m not going to say it’s bad, because it’s not. She’s actually very talented. It’s just not my thing. I prefer a natural voice…one that sounds like an extension of speaking. This is too affected. Bummer. I’d love to hear her sing something more contemporary, more fun.

But her track is not my least favorite. That award would go to Marrissa Jaret Winokur. Who you say? She’s the woman that starred in “Hairspray” on Broadway. So obviously she can sing, right? Yes, she can. But there’s nothing more annoying to me than the “opera voice” except for the cutesy, girly, giggly voice. Yes, she actually giggles in the song. I get that she’s supposed to be singing to a child, but this is over the top. It’s so cute it’s annoying. But I suppose if I were three years old I’d feel differently.

OK enough negativity (I try to steer clear of that here, but I felt I had to be honest).

John Stamos sings a Billy Joel song almost as well as Billy himself. In fact, I thought it was him at first. But for only a second. He has a very nice voice and I’ve always liked that song. Meltingly good.

“Lullaby in Ragtime” done by John C. Reilly is fantastic. This voice is so natural and pleasing.

I think this is a good record to have if you like movie stars and music. It may not be something you’ll listen to all the time, but if it sounds interesting to you at all, you’ll be glad to have it. If you’re a parent of a young child I think it’s a must.

Now Miss Scarlett when are you coming out with a record of your own?

Watch some video on the [Rhino site Site]