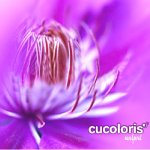 I put this in and the first few notes though, ‘What the heck is that? A didgeridoo?’ Well, sure enough, that’s what it is. Now how many pop songs do you know that use that obscure instrument? It’s very odd, but quite cool too.

According to their website: “In theater and film, cucoloris is the artificial manipulation of light and shadow to create effects that mimic light patterns found in nature”

This is a nice EP. The sound (if you subtract the didgeridoo) is much like the Cocteau Twins. The fuzzy, swirly music of Clay Tison with the light airy vocals of Kat Cook make a beautiful combination.

I can see these songs as background music for a film (and I thought that before I read what their name means). Maybe while the lead couple drives down a dirt road in a beat up jalopy. I don’t know, that’s what I see when I close my eyes.

The cover art is very cool as well. This is a great EP, I really hope to hear a full length recording from this band in the near future.

I did find a [My Space page] but still no official site –May 2007 I learned the band is defunct. Too bad, they were good!!