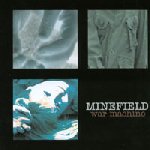 Minefield is not an industrial Goth band despite the name. The band make a delicate and eerie music. Tamara Kent leads the group and writes the songs. “War Machine” shows off Kent’s vocal dexterity and ability to create unsettling moods.

The cover of PJ Harvey’s “Teclo” is another masterpiece. Kent slows it down and makes it more ethereal and less bluesy. The aching feel of the original is retained though.

“Touchdown” is slightly like Tori Amos. Its prettiness is given a darker intent by its slow pace.

“Darkness Becomes you” has been described by Tamara Kent as being inspired by an old vampire film. It sure sounds that way. The song is beautifully dark and complex. It should wind up on a real soundtrack.

“By Your Side” seems like a love song, but the sinister words make it one of hate also.

“While you were sleeping, I was plotting your destruction”

“War Machine” is a compelling and haunting work by a gifted band.