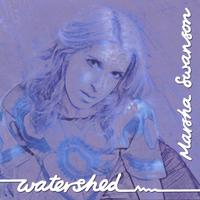 Marsha Swanson is an English singer who’s just released her debut album. Her soft voice and uplifting melodies are a joy to hear.

“Don’t Blame it on Love” is an honest breakup song with an impressive instrumentation.

“Johnny Can’t Read” is an intriguing song about a troubled boy. Swanson really gets inside his head. Musically it’s reminiscent of Dido in its sweeping instrumentation.

“Hoovering the Sky” is an up-tempo song with surreal lyrics.

“Madam M” is the overblown and theatrical standout of the album. I’m reminded of Kate Bush at her most playful. “One look in my eyes and you’re hypnotized” indeed.

A brilliant track on a lovely album

← Concert: Jenny Lewis with The Watson Twins in Manchester
Album Review: Pulling all the Rind Off by Suzy Callahan →