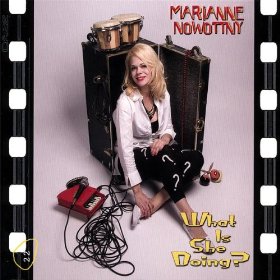 [file this under, ‘it’s not you, it’s me’]
Oh Marianne Nowottny. I don’t know where to begin. I was sent her record Illusions of the Sun several years ago and I confess I thought it was a joke. To my ears she had no rhythm, sang off key, and sounded like she was playing piano with her elbows.

I went online and saw that she had some really stellar reviews. I also noticed that one of the discussion lists I am on, seemed to have some nice feedback about her. So I thought it must be me. There must be something I was missing. So it kept it in my rotation for a very long time. We’re talking months.

After awhile some of the songs grew on me, but I never actually liked any of them. They grew on me the way might an acquaintance, maybe a co-worker that you have some sort of affection for because you know they’re tryin’, darn it. That’s how I felt about her. So while I wrote a review back then, I chose not to post it.

So imagine my surprise several years later to see an envelope with her company’s name on it. Yes, it was so burned into my brain that I recognized the name immediately. I had just picked up my mail and my husband was driving and I shrieked, “On My god, guess who this is?!” He went through the list of other notorious submissions and eventually guessed her. So we popped it in right away.

I bet you’re expecting me to say she’s changed and she’s now awesome and I love it! I’m, sorry. I mean, I think she’s matured as an artist and the songs are much more listenable. But she’s still out there. And I still can’t say I get it. But I get it a little more than I did her previous one.

Her voice is, distinctive. I can’t really tell if she’s a great singer or not because she has an affectation that sounds more like she’s speaking the words rather than singing them. I bet she can carry a tune, but it’s hard to tell here.

The production is really strange in that it sounds quite muffled. The part that’s “in focus” is the tinkly triangle sound, while the synth and vocals are more “blurry” and mushy. So I can turn it up, and up, and all that gets louder is the tinkly top part, I still can’t make out the lyrics. Though that may also have something to do with her vocal style and the backing vocals.

Mr So & So is a dancy number that would be cool playing in a loud club.

Where you Are is actually pretty.

Cherry Blossoms is probably the most normal. Which is to say, the most non-Nowottny one here.

Kung Fu Kitty is electronic and has a dance beat. It’s weird. I guess you could have guessed that by now.

I think I’ll just say that there’s something here, and others seem to be able to grasp it, but no matter how hard I try and how much I want to like this, I’m unsuccessful.

Please please give me your thoughts! To answer her own question, what IS she doing? I’m afraid I don’t have an answer. You tell me.

← Album Review: This and That by Lizzy Parks
First Concert in the new space!! NLX at Collected Sounds →

1 comment for “Album Review: What is She Doing? By Marianne Nowottny”