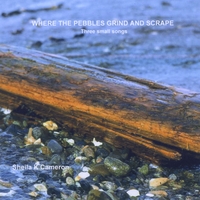 These song are all pretty short. So it’s really a small EP.

I’ve Waiting a Long Time is kinda bluesy, which was unexpected.

Somehow shows off her voice better than the others. Maybe it’s just mixed differently. But it’s got nice instrumentation as well. I like this one best.

Let it Come From the Place Where the Pebbles Grind and Scrape is the longest song at just over 2 minutes, it’s very pretty as well.

It’s a nice little collection that I hope will continue to grow.

Track Listing
1. I’ve Waited a Long Time
2. Somehow
3. Let it Come From the Place Where the Pebbles Grind and Scrape