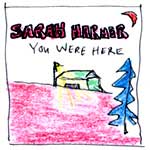 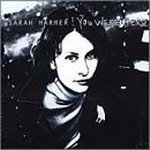 When Sarah Harmer first released her CD “You Were Here” in Canada, it had the cover on the left. When it was released in the States, it was given the cover on the right. In both CDs the music is the same, just the covers are different.

After hearing some folks on both the Sarah Slean mailing list and Ecto raving about Sarah Harmer, I went to her web site and downloaded her song “The Hideout” and fell in love with it. I couldn’t stop listening to it. I ordered the CD on line and learned that the rest of the CD is as good or better than “The Hideout”. This is a wonderful CD.

Sarah’s music is a little bit country rock, a little bit folk, and totally addicting. She has a wonderful voice and writes beautiful songs.

Review by Morgan Smith
I have to say, that this is, the first time in YEARS I have truly been taken by an artist so violently. After hearing one of my friends rattle on and ON about how fantastic she is, and how fantastic her band, Weeping Tile is, I finally downloaded some MP3’s and MY GOD! What an amazing singer!!! I now own two Weeping Tile CD’s (“Cold Snap”, and “Eepee”) which are both fantastic and also feature her beautiful songwriting.

I have also mail ordered “You Were Here” directly from Cold Snap Music. This is now on my coveted Favourite CD rack in my room directly above my stereo, as it is played so often, I want to keep it in easy reach.

After hearing her intensely heartening lyrics, coupled with her blend of (I hate to sound cliched, but she is THIS GOOD…) “funkified” folk and rock, I can’t get enough!

Now I regret not attending her concert the last time she was here. To hear her intimate songs like “Coffee Stain”, and “Open Window” in a small venue like the ones she performs in now (And believe me when I tell you that she won’t be there for long) would be an incredible experience to say the least. My friend agrees. Of course he actually GOT to go. Bastard.

Anyway, to sum up, Sarah Harmer is now one of my favourite performers, along with others such as Sarah Slean, Ani Difranco, Tori Amos and, of course, Weeping Tile.

Go out and get some Harmer!!!