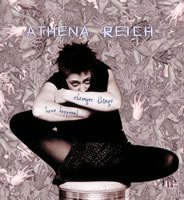 This woman is odd…and I mean that in the best way possible. I mean, with a song title like “The Ballad of Chicken Shower” I guess you don’t need me to tell you that. That song is a cute little waltz that actually includes some squawking.

Her voice is as unique as her song stylings. It’s perfect for the songs, which range from pop to punk to ballads. Many with a cabaret-ish feel.

“Contra*dick*tions” is a naughty little punk number of which your mother would not approve (which makes it more fun, no?)

“Anarchy” is also on her previous recording, “Athena Under Attack” which was reviewed here at Collected Sounds in September of 2003.

“Back to Canada” is a really pretty song.

The CD comes with a little black and white comic book of sorts. I can’t say I understand it, but it’s cool.