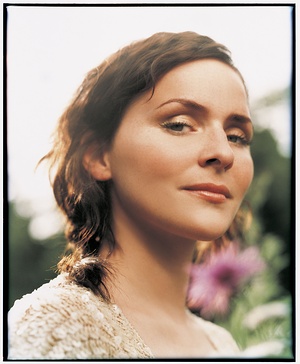 A review by David Adair

“Above you now the albatross is sighing, the kings they are all dying cause there’s no one to anoint them and the swords are all broken, broken in two.”

The uplifting and heart-warming percussion free set ended on a high, with the aid of an ascending keyboard component and the soft Andy Williams meets Brer Brian singing of the composed Oly Ralfe.

Subtle Bjorkesque and Joanna Newsom like enchantress; Emiliana Torrini scattered tranquillity around the room like snow drops, as each note of the soothing instrumentals ably provided by a tight knit supporting trio of musical males merged inexorably with the singer’s caressing voice. This hit each member of the sold out show with compassion and imbued feelings of comfort in them. Parading tracks from her recently released second album ‘Fisherman’s Woman’ with pride, humility and emotion like a proud mum bringing home her new born, meant that Emiliana brought life into a part of Manchester. The opening double whammy of ‘Today Has Been OK’ and ‘Snow’ started the comforting mood off nicely.

The leading lady was calm and crisp throughout all the songs, despite the occasional buzzing technical difficulties, as her effervescent personality and cheeky humour made the time between songs almost as compelling as the main set. The Half Icelandic and Half Italian young madam was at her ironic best when introducing the meanderingly dreamy; ‘Lifesaver’ that was introduced as their ‘Thrash metal song in slow motion’, promising to dabble in that genre in the future. There is a slight haunting edge to this quartet’s music that adds to the listening experience and its captivating nature. Also, it was easy to understand why Emiliana was personally and individually selected to perform ‘Gollum Song’ on the film ‘Lord Of The Rings; The Two Towers’. Judging from tonight’s dazzling display it is predicted that this polished performer’s voice will pop up in many weird and wonderful settings in the near future.