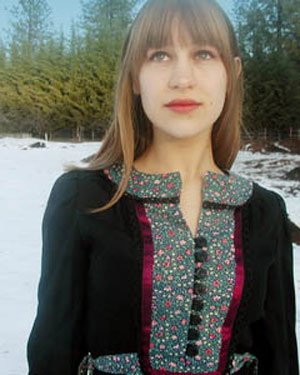 I just returned from an absolutely awesome concert by Joanna Newsom, and need to do some gushing and raving about it, so herewith.

Before tonight, I wouldn’t have described myself as a Joanna Newsom fan. Sure, I had a copy of The Milk-Eyed Mender, and enjoyed listening to it, but her voice (which is frequently described as childlike) wasn’t really something I could imagine wanting to listen to for long lengths of time. Still, when I saw her name there right at the top of Paradiso’s agenda for today, with a bold “sold out” note underneath it, it took me less than a second before I was on the dutch equivalent of Craig’s List, looking for anyone with a leftover ticket. There was exactly one, and a minute later it was mine. So much for my plans to go and be productive tonight…

Opening for Joanna were the Moore Brothers, going on stage nearly as soon as the door had opened, while people were still filing in. I thought this explained the noise from the crowd, but after 10, 15 minutes, it was still going. Not just talking, but loud talking, enough in total to drown out the quieter parts of some of their quieter songs. I can’t believe how rude the audience was, and I was fearing greatly they’d behave the same with Joanna. The Moore Brothers weren’t really my type of music either, but they _were_ good, doing interesting things and deserving way more than this audience was giving them. Meh.

Still, the audience grew completely silent when Joanna and her band took the stage. And then Joanna started playing, and I pretty much forgot everything else. Wow. She played with such… joy, such fervor! She frequently had this big grin on her face, and that was totally infectious, as I kept finding it mirrored on my own face. I’m always very fond of harp players, but the way she attacked the instrument took it all into some other realm. Such gusto! And her band, playing ‘drums’ (one big drum and two cymbals), banjo/lute and violin were out of this world too, offsetting Joanna’s performance, giving her little breathing spaces so that she could come back even stronger, adding accents and punctuation and emphasis. She played several of the insanely long songs from Ys, which I here heard for the first time, but the total experience was such that the songs kept you totally captivated, and they still seemed to end way too swiftly. The audience also mostly redeemed itself in my eyes by the insane level of enthusiasm shown after each song, nearly surging forward with applause; more than I’ve ever known from a Dutch audience. Yet, despite a standing ovation and endless applause, Joanna only gave us a single, short single song encore. (I am left wondering if this was ‘repayment’ for the rude behaviour toward the Moore Brothers, who, as she mentioned several times, they loved very much.)

Anyway, the hour and a half of music she gave us was everything I could’ve hoped for, and so much more, so I shan’t complain. 🙂 If you even only marginally like her CDs, I urge you to attend a live concert by her if you’re ever able to – she’s absolutely amazing!