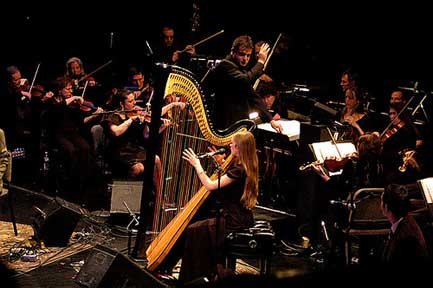 The orchestra worked well, rich and percussive, much like the album arrangements. Wish there had been a few more grand symphonic moments with noisy bowing and blowing and banging, but as they weren’t limited to pleasant background textures or syrupy sentimental strings, I was happy.

It was fun to watch Joanna’s fingers (through binoculars, as I was closer to the roof than her) – spiders dancing across strings. She’d play a glissando with pretty notes all in a row, but her fingers wouldn’t run across the strings like a dainty angel; instead they plucked, angular.

A fellow concert goer commented that she wasn’t a good ‘band leader’ – between songs there’d be uncomfortable silence or tuning, she’d say hi, and random audience dude would propose marriage. Joanna’s drummer stepped in and made not entirely funny jokes (“I call this song ‘Barbara’. You guys get it, right? Jo has lots of songs with female names. It’s a funny joke.”) He told us to meet him afterwards by the merch table if we weren’t sure who we were voting for, as he’d been shilling for Obama and had his arguments down pat. The band (violinist/bvs, mandolin/banjo, Joanna, drummer) would look at each other, shuffle about, wonder when to start, and then the music would begin and everything fell into place. I don’t have a problem with uneasy stage patter, as long as the music is good.

I overheard a couple referred to ‘Colleen’ as “that song that sounds like Riverdance” and contemplated hitting them over their heads. It only sounds like Riverdance if that’s the only vaguely Irish music you’ve ever heard, and what idiot could be so limited in their exposure. A Brooklyn hipster, I guess.