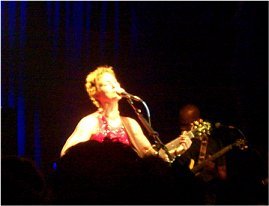 I had only heard Kim Richey’s name but had not heard any of her music. Wow, I was very pleasantly surprised. She reminded me a lot of Shawn Colvin’s pop/folk stuff (as opposed to her songs that sound more “country-ish”). Though I’ve since listened to some of her other material on the internet and it seems quite country-flavored. She even resembles Shawn with short shaggy blond hair. But her voice is her own. She can sound gusty, powerful and sweet all in one song.
At one point she saw someone in the audience and said, “You are NOT talking on a cell phone are you?” Then she took the cell phone from the person and chatted a little with the woman on the other end. Seems the other person was in Chicago and was a Kim Richey fan so the friend was sort of “broadcasting” the show to her. After talking to the friend for a minute (she told us to talk amongst ourselves) she gave the phone back and continues with the show. I thought that was a cute touch and probably a great treat for the fan on the other end!
She was a great opener.

This was my first time seeing Jonatha Brooke live. She blew me away. Such stage presence. Beautiful, funny and she has great arms! The audience kept asking her “Where’s the beach?” (as in the Muscle Beach). She finally got it and gave us the, “it’s over…there” bit. Nice touch.

The set list goes like this (with comments)
Glass Half Empty
Blood From a Stone (which started out and finished as Lou Reed’s “Walk on the Wild Side”)
Red Dress
Here she told a story about how she was in Madison, Wisconsin the previous night and at the venue there was a huge moose head above the stage. The moose had red lights in his eyes and at times would blow smoke out of his nostrils. “So it’s good to be in Minneapolis!”
I’ll Take it From Here – she said she wrote this song for the “Felicity” TV show and everyone there LOVED it…but they haven’t used it yet.
Crumbs
Genius or a Fool – This song was a sing-a-long. She told us that this song was inspired by the time she met Daniel Lanois at a music convention. She was wearing a pair of two-toned blue boat shoes that she thought were “spanky”. He came up to her and said, “What is it that you do?” She smiled and said, “Well, I’m a chick singer songwriter, but I try to do my best.” And he said, “Well, judging by your shoes, your either a genius or a fool.” This comment took her right back to 7th grade and the insecurities you have then (and now) and the song grew from that.
Is This All
Digging
No Better
How Deep is Your Love – I didn’t really care for the song on the CD, but it really rocked live. I like it now!
Your House – She dedicated this song to a woman in the audience who was celebrating her 81st birthday. Jonatha called her a “gem”.
At the Still Point
Steady Pull
Linger – great ending song…but wait, there’s more.

Encore One:
Out of Your Mind
Because I Told You So

Encore Two!
So Much Mine

This was a fabulous show; if you ever have a chance to see her live do it!