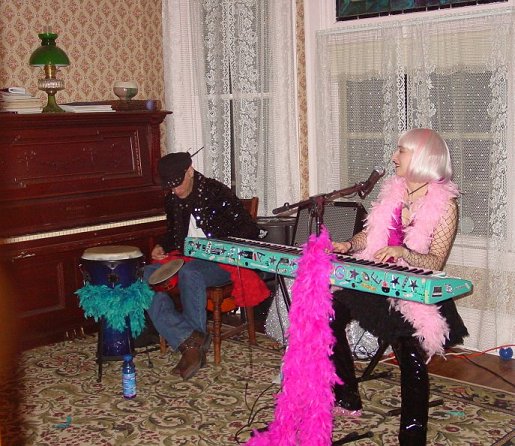 I do not have a set list because we didn’t record the show this time and was too busy running around to keep a running tally. She didn’t prepare a set list, but rather played what she felt like it at the time so she doesn’t have one either.

This was a little different from other Sage shows we’ve had. For starters there weren’t that many attendees. It was Halloween party weekend so that’s not too surprising, with that kind of competition. But she’s been here before on that weekend and it was a smash hit! I don’t know. I do know that we had some newcomers to the scene and they were all mightily impressed, so I consider that a success.

Another difference is that this time Rachael brought her drummer Jagoda. It’s amazing how much difference in sound that makes. I mean, Rachael is fantastic on her own, but it’s really cool to hear yet another layer to her live music.

Also I couldn’t help noticing that Jagoda looks a lot like a young Bruce Willis.

The banter between them was hilarious. There was one song in which Jagoda ended a little early, so Rachael had to end too. She said, “I had a couple more verses to do, but that’s OK…” She was giving him a really hard time. Then later, she was playing a sad song but still being kind of silly. She wanted someone sad to look at so that she could feel the moment so she asked if anyone was miserable and Jagoda sheepishly raised his hand. Of course the room erupted in laughter “ruining” the poignant moment. But it was worth it.

There was a costume change after the first set. So to further punish Jagoda she had him wearing much of the costume she wore for set one. But with the addition of a red tutu.

It was a very silly evening with lots of laughter, sincerity and great music.

Personal note: At one point Rachael said that the feeling in the room was a little somber and she wanted to liven it up. She suggested that there might be some ghosts of previous divas here. My 19-year-old well loved cat Misha had passed away just the day before this show so I’d like to think it was she watching over us. She was a diva, that kitty.