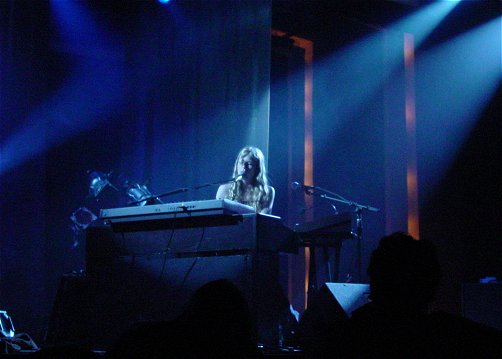 Opener Jeff Johnson has potential. He has a very nice voice but a problem with rhythm. He had pre-programmed drums and even they were off-beat.

He is a good guitar player but perhaps needs some practice. Meaning that he tried to fit too many notes into too short of measures and when he didn’t get them all in, he just played them anyway, changing the rhythm.

But he was charming and had a good stage presence. With practice I’m sure he’ll be great.

He did have a fan club. There was a table of boys around the age of 13 listening very intently, singing along and even calling friends on cell phones so they could listen. Then when Jeff was done, they left. Their loss!

Let me first let you know what a big deal this was for me. I first heard of Charlotte Martin years ago when another artist, and friend Terami Hirsch, suggested I check her out (the two are friends). I did and I liked her very much. Since then Charlotte has come to Minneapolis on several occasions and none of them worked out for me.

The first time, she was playing the same night I had a house concert. So I could not go.

Try #2: I waited to buy tickets at the venue to avoid Ticketbastard charges. Well, the show sold out days before the date of the show.

Try #3: Charlotte gave me the name of someone to contact who would get me on the list and let me know the next show’s date. He never got back to me. I didn’t find out the date of the show until it had passed.

Try #4: Charlotte was playing here with some girl rocker showcase thing for a make-up company. Also in the line up was Emm Gryner among others. Through Emm’s people I got tickets in exchange for handing out Emm CDs. So I went to the show thinking this is it! But as I got into the theater Charlotte was on stage singing her last note. “Thank you and good night!”

So as you can imagine, I was cautiously excited about this performance, or at least my attendance at it. I kept thinking something would happen before she came on stage, either I’ll get in a car accident on the way there, or something else will happen. It wasn’t until she came on the stage and began performing that I realized my goal of seeing her live was actually was coming to fruition. It was worth the wait.

Charlotte began at 9pm. My first thought was that this was a completely different show than I was expecting. I had just seen the DVD so I knew that she was experimenting with a loop station sort of thing, but I didn’t know she’d be using it for all her songs and with so many “extras”. This was really a nice surprise.

On “Under the Gravel Skies” she used a wacky voice distorter (I think someone called it a “virus”). Very cool. I love that song. That was one of the highlights.

She began to play “In Parenthesis” with some major changes and said, “Do you remember this one? Well, she’s gotten a little testosterone since you heard her last.” I’ll say.

Before playing “I’m Normal” she talked about all the changes that have occurred since she was here last: she got married, got another dog, bought a house, left RCA, started eating meat again and got her bangs cut among other things. She also informed us that she’s stalking Joaquin Phoenix. Must have seen “Walk the Line”, huh?

It was a fabulous show. Charlotte is an engaging performer. Her voice is exceptional (I have no idea how she hits some of those notes), the songs, of course are beautiful, she has a great stage presence (very goofy) and I am so happy that I can finally say I’ve seen Charlotte Martin perform live.

I chatted with her after the show for a moment as well and she was warm, friendly and kind just like I thought she’d be.