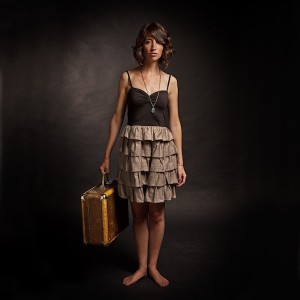 “Miller, a classically trained pianist who studied under a Julliard alumna for ten years, began her career in the Brooklyn and East Village music scenes in 2007. With song topics ranging from love to bathroom graffiti, Miller’s music oscillates flawlessly between folk-ish tunes on guitar and pounding numbers on the piano.

The anticipated follow-up to her 2010 debut album Fake Love, Measures & Waits is about the toils of measuring and waiting for love.

With quirky lyrics that teeter between honesty, seriousness and silliness, Miller — who was named “New York’s best kept secret” (ResidentMediaPundit) — has developed a reputation for her unique live shows, which are often highlighted by her propensity for error. “I always mess up somehow in a live show. Whether I forget the words, screw up the music, or fall off the stage — true story.” These “Debbie Do-overs” have become fan favorites. “I think it’s because people respond to authenticity and honesty in art and performance,” she said.

After moving cross-country to Seattle in 2010, Miller immersed herself in the legendary music scene and has been quickly embraced by West Coast audiences.

“…A highlight of the night was watching the adorable Debbie Miller take on the role of the Queen of Hearts, as she sang an unexpectedly humorous song about the joys of chopping off heads wherever she goes.” – City Arts Magazine

Miller has performed at The Living Room, Rockwood Music Hall (Stage 1 and Stage 2), Bar 4 and Café Vivaldi in New York City. In Seattle she’s graced the stages of the Fremont Abbey, Conor Byrne Pub, and JewelBox Theater at the Rendezvous, and will celebrate the release of Measures & Waits at Columbia City Theater this spring.”

I have heard some of this and so far, I love it! I think you will too!