This came across my “desk” today (well, I got to it today, anyway!) and I clicked on the link to the video then went about clearing out my inbox but as soon as she started singing I clicked back over to the YouTube tab and was mesmerized. 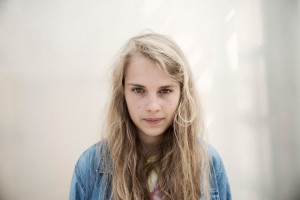 [press release]
There’s a violence to the countryside, encapsulated in the sumptuous prose of D.H Lawrence’s in which metaphors engorge and heighten into states of pure ecstasy. A fantastic and virulent strain of writing which, thanks to Marika Hackman, now exists in song. Double A-Side “You Come Down” and “Mountain Spines” produced by Johnny Flynn and Adam Beach from the Sussex Wit will be released September 3rd through Transgressive imprint paradYse (Theme Park, Cold Specks).

Marika’s music channels something very different to the happy-clappy nature of recent folk hers is a far more potent vision in the lineage of Syd Barrett, but presented by an enigmatic beauty with a striking vocal delivery more akin to that of Nico deftly exploring an unsmiling bereft landscape.

“I don’t know why I started writing; it’s something I’ve been playing around with since I was so young that I can’t remember how it began. I think living in the countryside for most of my life has affected my writing as nature usually manages to creep its way into my songs…”

With tours already in place with Benjamin Francis Leftwich, and new fans such as Zane Lowe proclaiming her his Next Hype, you can be sure that Marika Hackman will blossom into one of the most important creators and interpreters of song in our times.

Marika will be supporting Benjamin Francis Leftwich on the following dates:

The songs aren’t out until September 3 (but that’s only 6 days away!) but here’s the [Amazon Link]