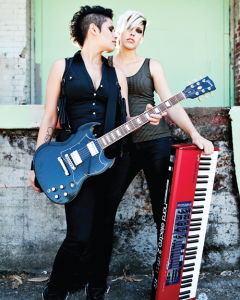 This band’s press release showed up in my inbox, I took a listen and I really liked it. So I thought you might too.

“Playboy School takes no sides, incorporating the danceability of the beloved Friday night DJ set with showmanship that inspires nostalgia for a rock and roll era long past.

With the contributions of some of the region’s most noteworthy musicians, this electronic rock duo (Liani Moore and Mackenzie Knoester) has crafted a set of songs that is both heartfelt in content, and ass-moving in form.

A classically trained multi-instrumentalist, Moore lends a discerning ear for arrangement, coupled with an on-stage charisma that could power a small city. Knoester’s contribution to Playboy School as utility-man and drummer represents an unexpected departure from her modus operandi in regionally-acclaimed all-girl hard rock outfit, Aroarah.

Playboy School is taking its freshest recordings on the road, with recent appearances at such noteworthy venues as Ace of Spades (Sacramento), the Uptown (Oakland), the Roxy (Hollywood), and San Francisco and LA Gay Prides.”