I’m in love…
I heard Ingrid Michaelson on the radio. *Gasp!* I listened to the, ahem, radio, I know, I know…but we have a super cool public radio station here in Minneapolis which I have raved about in the past. Even if you’re not local you can listen to them online: [here]

Anyway, I heard her in the car and my husband said, “Do you know her? Sounds like someone you’d like” and I had to admit that, no, I had not heard of her. I pretty much have only heard of people who have sent me stuff or someone I happen to catch on Letterman. But I did, indeed, like her. Then I heard her again…and again on the radio. So I broke down and…yes, brace yourselves…BOUGHT a CD. Yes, it’s true folks, I actually laid down my hard earned cash for music. I can’t remember the last time I did that. But I was on a roll so I also got Shawn Colvin’s latest (which is not new anymore, but is new to me), Siouxie’s Mantaray, Bic Runga’s latest, Birds (again, not new) and the Once Soundtrack. So of course now I am ignoring the music I am supposed to be listening to (i.e. the stuff that people have submitted).

I am listening to Ingrid’s now for the first time all the way through…I LOVE it. To my ears she is a mix of Regina Spektor, Erin McKeown, and someone else, perhaps, Sarah Harmer?** Anyway, she’s fabuloso and I am so glad I got this. 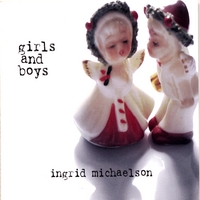 I will let you know about the others as I listen to them. I tried to listen to the Once Soundtrack in my car on the way to work yesterday but I started crying and had to turn it off. Didn’t want to walk into work with Courtney Love-style mascara running down my face, you know.

**I just realized I think it’s Adrianne she reminds me of. Just the way she sings certain notes.