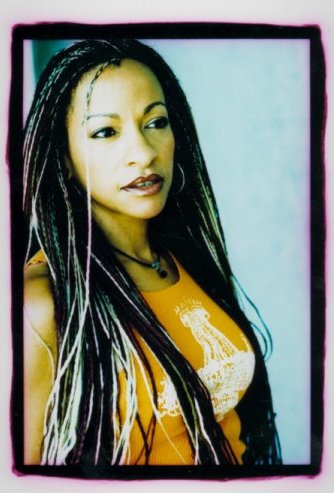 Like watching a phoenix rise into the air, as Debby Holiday took the stage at The Gig in Los Angeles, CA, the atmosphere instantly blended into an open sky of emotion, musical passion and freedom. As all eyes were transfixed on the stage, it was obvious that in that space, something extraordinary was happening: Debby Holiday and her band reached a level of intensity, sincerity and spontaneity that enveloped the room and offered the audience an invitation into a world that was impossible to refuse.

Captivating audiences with the power of her voice and the strength of her stage presence is nothing new for Debby Holiday. As if proving the old adage about the apple not falling far from the tree to be true, Debby came from a musical family— her father was a songwriter and her mother was a concert pianist. While she has been singing for as long as she can remember, Debby began performing professionally when she was in her early twenties and she realized that music was truly one of her gifts. “When it hits, you know, you just know.” But, it is the connecting with other human beings through her music that she values most. “I really genuinely like people,” Debby explained. “When I was a kid, music pretty much saved my life. I think it is such an incredible gift to be able to communicate and have someone walk away and say, ‘Hey, I feel better’ or ‘I feel like someone understood,’ or ‘I just had a good time.’ That is what I like the best about performing— the experience of exchanging.”

To see Debby Holiday perform is to witness joy in action. She accurately describes her live show as “loud, energetic and giving.” The power of music is one that cuts across all boundaries and gets to the heart of the matter— and often times, right to the heart of the soul. “Music removes a lot of barriers. Most of us are moved by the same things,” said Debby. Songs like “What’s The Matter,” “That’s The Way It Is” and the ballad “Goodbye” are universal favorites for that very reason. “The songs that audiences respond to the most are the ones that were written from the most extreme depths of emotion.”

When songwriting, Debby Holiday draws inspiration from both the experiences of her own life and that of friends and loved ones. Sometimes, it is a combination of the two, as in “Goodbye,” which was culmination of mixing three or four experiences together to create the theme of the song— one of not wanting to end contact with a loved one. “I don’t want to do it, don’t think I can even try, I don’t want to hear it out loud, I don’t want to say goodbye,” sings Debby making conviction and vulnerability complementary in the space of a song. In addition to writing about the dynamics of romantic relationships, Debby touches on other themes close to her heart— like becoming a world in which we support and guide each other instead of opting for the path of competition. “I tend to write heavy love songs or heavy world songs— like “Things Change.” It seems fitting that Debby Holiday’s CD opens with “That’s The Way It Is” (which was recorded by producer Clif Magness who worked with Avril Lavigne on her debut CD) and ends with “Things Change”— two songs that are about celebrating the beauty of our differences and making the world a better place, while the songs in between explore our relationship to ourselves and our close loved ones. As in life, our ability to love ourselves begins deep within and stretches outward toward the edges of our lives and into our world.

Being true to herself is a key element in Debby Holiday’s philosophy towards music and life in general. When creating, it is essential for artists of all kinds to “do what makes you tick and be who you are.” Because neither praise nor criticism have the power to define someone or her work, Debby explains that she is careful not to take every outside opinion to heart and she realizes that staying grounded involves remaining humble and focused on what matters the most. “I just put on an Aretha Franklin record. . . Sometimes, listening to someone you really love reminds you what music is all about— the fact that it made you feel something.”

With a sound described as a combination of “Sheryl Crow meets Lenny Kravitz,” Debby Holiday has worked with fellow Los Angeles-based musicians Josh Freese, who played on “All I Ever Wanted” and “That’s The Way It Is,” Michael Duff, for whom she sang background vocals on his latest EP, and artists like Chris Pierce, Eric Colvin and The Larrys, sometimes sharing the stage with them. When performing her own material, she is joined by guitarist Bryan Corbett, with whom she does a lot of writing. guitarist Jeff Fedak, bassist Orlando Sims (formerly of Chalk FarM) and drummer Jonathan Dresel. “Before a show, I make sure I connect with the band, just so it doesn’t feel like five different people out there. We’re a team. It is important to connect with the people you’re creating music with.” Debby wholeheartedly embraces the immediacy of a performance. “You’re there, you’re going, you’re in the moment. You don’t have to think, you just do.” And, it is in those moments that Debby shares the undeniable truth that expressing yourself is a crucial key to living and an integral part of connecting. When asked what she hopes people will take away from her music, she said, “joy— and knowing that someone else on the planet feels the way you do. Someone else doesn’t want to leave someone they love or someone else is pissed off. I want them to walk away with the sense that it is okay to express yourself. So many of us are not taught that it is not only good, but necessary do so in whatever way you think you can be the most helpful to the planet.”

In addition to the pure love of it, there is another reason that Debby Holiday excels in her live shows and that is the honoring a kind of timeless reciprocity. “I just want to sing all the time. I just want to go out there and perform. I would love to have the experience of meeting people all over the world and seeing what it’s like to hear, ‘hey, I was going through something and that song of yours made me feel better.’ I just feel like I owe all the people that helped me through my childhood to put it back out into the world. . . I am hoping this is a way I can give.”