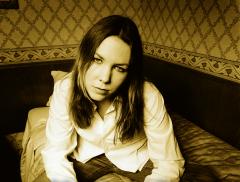 Thea is now a Happy Gilmore!
An interview by David Adair

“I never have intentions when I write an album. With Liejacker I got fed up at people having too much input in my work. This album is about me taking back control.”

This is the confident, almost contented reply of one of the UK’s most understated singer/song writers, as she settles into a plastic picnic chair back stage at Delamere Forest, having given fans of the sturdy and adventurous Mersey pop combo’ The Zutons, a varied display of upbeat thoughtfulness and tasty tune building. Even though Thea Gilmore is still shy of thirty, ‘Liejacker’ represents her eighth album and, Thea’s songs have grown to the extent that extra vocalists were needed on certain tracks like ‘Old Soul’ (Dave McCabe from The Zutons) and ‘Lower Road’ (Joan Baez). With the former tune especially, the soothing, yet dusky vocal combination works so well it must have been meticulously planned:

“No, I didn’t write the songs with those people in mind, I usually just like to get the songs down, then have a think about the best way to get them across. With ‘Old Soul’ I felt it really needed another voice and in the case of the song with Joan Baez, it started out as a pipedream really. ‘Lower Road’ is a song that features three different perspectives and I was made up when Joan agreed to do it, I have toured with her before and I have always admired her.”

A natural follow on from this approach would be to write a song completely for another artist, but would this contrast with the deeply personal and emotive nature of Thea’s varied material? For many a singer/song writer their songs are like their first bikes, they’d not give them up for someone-else’s pleasure for all the sugar in India. However, the independent heroine doesn’t flinch upon her reply, something that is quite a feat, as a variety of midges start to feast in the summer evening air on a picnic ground of the skin of both parties to this chit-chat;

“No, I love writing songs and would definitely write them for other people. I’d like to write for a really cheesy artist.”

A cheeky smile is emitted after the last comment and it is impossible to resist a playful jibe;

“No, I couldn’t write one of theirs.”

Her smile grows in recognition at the absurdity of the inclusion of Coldplay in that category. Turning to the topic of her gigs, you hear of bands/artists squabbling over what to and not to include in a set list and they only have one album, so choosing from eight must certainly be no stroll in the park;

“Oohh, it’s nigh on impossible to compile a set list these days. It usually ends in an argument with me and Nigel (Stonier, Thea’s husband and occasional co-songwriter). I have a large amount of slow songs, so I just want to make sure that I don’t bore the audience.”

Not many people who attend her flighty yet thoughtful sets have accused of that and no-one is doing so tonight;

“For The Zutons I needed to be more upbeat to suit the mood here tonight.”

Whenever Thea steps into the public gaze, there is always a calm amiability to her nature. Something that is refreshing and quite admirable given the personal nature of some of her songs, such as the Shania Twain spirited ‘Roll On’, the inner-demon revealing ‘Contessa’ and the haunting ‘Holding Your Hand’. These, on the face of it, give the impression that it would be quite painstaking to perform them live;

“No, it’s not difficult at all to perform any of the songs live, really. When you play a song for someone else then it often means something else to them. So I am just mindful of that. I love performing ‘Contessa’ anyway because it is one of my more upbeat songs.”

Polite forthrightness continues when an enquiry is made about which song from her sizeable treasure chest of material represents best, her current mood and thoughts;

“Oh, it has to be ‘Lower Road’, it starts off maudlin then it finds life.”

Sounds like a summary of the average (especially working) day for most mere mortals. With the army of midges growing by the minute, there comes a time in every interview when the bullet just has to be bitten and a tricky topic needs to be raised. In this case, it concerns Thea’s recent battle against depression, but there is every indication that this battle has been won. Many people swear by music as an ideal therapy;

“Yeah, big time, music was a really big part of helping me get better. I think the biggest obstacle to overcome with depression is to realise that it’s not uncommon and you’re not alone. Half the population probably feel the same.”

It is almost as though they were listening in to the last reply, as tuneful melodies in the form of The Beatles jams comes out from the dressing room/tent of The Zutons’ behind us. The above reply, especially the last sentence of it, has the feel of a poignant retro ballad. Their hometown of Liverpool is obviously important to them and always has been, but what of Thea’s home county, Oxfordshire?

“The only way it influenced me, was to get the fuck out of there. I used to live in a really small town with a population of around two hundred people. When I moved to Sandbach it was like entering a bustling metropolis.”

If you were to do an independent survey, probably at least 8 out of 10 self-respecting musos if polled, would say name Thea Gilmore, as the one artist who has been starved of the coverage she truly deserves. On the topic of the media she has this to say;

“In the UK I think we do really too much on tastemakers, it is a horrible place to make music. It is great audience wise, but too much emphasis is given to the current flavours of the month. My generation don’t stand up and say this is shit.”

“You do”. Lilly Allen does for that matter.

“Nobody listens to me though.”

A slightly animated presence begins to prevail and builds up as she broadens her point;

“Take what Radio 1 did with Cathy Davey. She is a great artist and they were all over her, but suddenly dropped her when she wasn’t popular enough. They don’t stand by anyone. “

‘Zuton Fever’ is being bellowed out by her one off co-singer Dave McCabe, onstage just behind us, Thea goes off and grabs her son, then dances her cares away contentedly. Don’t be confused though, the feisty anger and spirit that sees her speaking out about what’s wrong is still there. Also, so is the tuneful, mood building touch that sees helps to produce a variety of thought provoking, personal and challenging songs.

In ‘Liejacker’, we have an album that will test the ability of the Mercury Prize panel to recognise a searing independent spirit, when the short list is announced soon. Will they be bold? Will Man City win the premier league next season? The answer to these two teasers is more than to be likely the same.