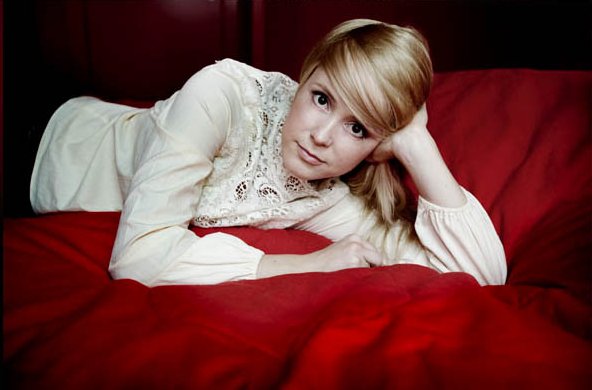 Tina Dico’s searching talent is like warm sand underneath your feet.
An interview by David Adair

The cosmopolitan London based and Arhus, Denmark born songstress Tina Dico, relatively recently loaned her services to the multi-faceted Zero 7 to feature on their 2nd album ‘When It Falls’. The amiable Dane already looks at home in the welcoming Night & Day Café, as she is relaxing on a stool at the bar, patiently passing the time prior to her first headline gig in Manchester. The predominant reason for Tina’s presence here, is to promote her enchanting, coming to terms with change debut album of ‘In The Red’;

“This was written partly when I was working with Zero 7 and partly since I moved to London, in order to set up as a song writer. I didn’t know anyone when I moved there and I was quite a lonely for a time.”

The above mentioned album features personal and searching tracks like ‘Losing’ and the aching, Elliot Smith veined ‘Room With A View’. Are numbers such as these difficult to perform live, given the emotive nature of them? Also, I have often pondered, what prompted the decision to open the album with the troubled, yet hypnotically rhythmic ‘Losing’? It is the first impression of her sound that many listeners will have;

“None of my songs are difficult to perform live. Although they’re very personal, I feel that the audience are equally as exposed by listening to it. So, hopefully there’s an instant connection there. I chose ‘Losing’ as the album opener because it’s dark but hooky. It is a good bridge between the poppier and the darker side of the album.”

With the open discussion moving onto her song structure and composition, the strong minded lady starts to adopt an authoritative tone, as the impression is given that this is something she has mulled over many a time in her solitary London home. There appears to be a poetic spark to the lyricism, does this ignite her creativity?

“No, I don’t write a lot of poetry anymore. It’s all about music for me now, there is no poetry without music. The lyrics are poetically orientated, but they do not trigger the song writing process. I write unstructured things sometimes, what is it you English call it?”

Come to think of it, her lyrics and her ability to conceal loneliness inside concise wording in numbers like ‘In The City’ and My Mirror’, is almost Orwellian in it’s feeling.

Denmark is not really renowned for being a hotbed of musical creativity and talent. So it’s intriguing to discover how hard it was for a veraciously independent songwriter to get established there?

“It was hard, it was a slow building process. I released three albums there and it was the third one that really hit home.”

Luckily, such was her keenness to elaborate on this; I did not get the chance to embarrass myself by suggesting that she is Denmark’s equivalent of Snow Patrol!

“It is very unpopular to be a singer/songwriter over there. It is very pop-orientated, so Record Labels weren’t really interested in what I was doing. It was hard work, but that is most satisfying part of it, I think. I’m quite a mathematical person. I’m good at planning things and was very excited to learn about the workings of the music industry.”

The independent woman then went on to parade her subtle, yet feeling packed style, with debut album tracks featuring prominently. Tonight, she opts to introduce herself through one of her warmer and more pop friendly offerings ‘One’. The uplifting two guitar tango effect given to previous single ‘Warm Sand’ reaches out to shake hands with each member of the contented crowd. The percussion free set produced by Tina and her deft guitar stroking sidekick oozes intimacy, as her world of emotions are prized open with looping guitars. ‘Room With A View’ increases in poignancy and it is hard to resist a glance out the window at the back onto the dark streets, as the Dane’s vocal clarity, conveying loneliness clashes against the soothing melody to open up the world of an artist, battling against the contrasts in life. On tonight’s showing, it might not take three albums for Tina to take off here.

← Album Review: Forward Motion by Davison/Coleman
‘Bout time they got their come-uppance →