An Interview With Vienna Teng by Collected Sounds 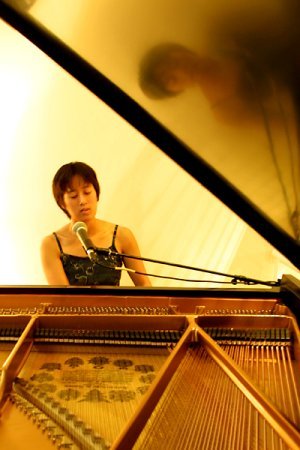 Where are you based?/Where did you grow up?
I’ve lived in the San Francisco Bay Area all my life. Grew up in Silicon Valley, went to Stanford University, now living and working in the same endless suburbia, with occasional trips up to San Francisco proper. I’ve been itching to move somewhere else for years, just to have a change of scene, but I know I’m going to miss it terribly when I leave. It’s home.

Tell us a little about how you got interested in music and when you started writing/playing.
Oh, that started way back, in the pre-cognizant years. According to my parents, I started singing before I could really talk — I’d listen to the record player and sing back the melodies note for note, but the words would be absolute gibberish. And I’d climb up on the piano bench of whoever’s house we happened to be visiting and plunk on the keys. When my dad asked me if I wanted piano lessons, I said yes, and ended up taking them for twelve years pretty much without complaining. I wrote my first song when I was six, I think. It was a little thirty-second piano piece called “Church Song.” And I wrote my first song with lyrics when I was thirteen, but I’m not going to share that with you because the words are too embarrassing.

Describe your first performance (time, place and any feelings that went with it).
I don’t know if I can really remember my first performance. It depends on what “first,” I guess. I had my first piano recital when I was six, and it terrified me. I played one of my own songs in a school talent show when I was in fourth grade and that terrified me too. It’s a recurring theme: I perform, I get terrified. It still happens. I enjoy it most when the audience sort of sneaks up on me. I used to play in the lounge of my college dorms, and sometimes I’d go through a couple of songs and look up to find a little crowd gathered around the piano, just listening. Those are my favorite kinds of performances. But I guess I’ll have to get used the expectant-audience way of doing things eventually.

How would you describe your style of music and who are your musical influences?
I’ve decided that it’s best described as “folk-pop” or “alternative pop.” It’s not as folky as real folk music and not as glossy as mainstream pop. I think I sort of aspire to be the third corner of a triangle, where the other two are Sarah McLachlan and Tori Amos. Those are my two most obvious influences, to the point that I actively try to listen to something else so that I don’t become a mere knock-off of either one. But really my influences are all over the map…Afro-Cuban music, jangly guitar rock, madrigals, modern jazz, epic movie soundtracks. I love absorbing music that’s sort of foreign to me at first. Their presence in my own songs is very subtle at the moment, but I think that’ll change.

1. What is the best feeling in the world?
Connection. That feeling of sudden understanding, of being in the same place. The “I know exACTly what you mean” moment.
2. What is the worst feeling in the world?
Boredom. I don’t mean those lazy afternoons spent lounging around the house; those can be nice. I mean long-term boredom, when you’re doing something that doesn’t excite you for months or years on end, but you keep doing it because the force of habit is too strong. The kind that leads to mid-life crises. I hate that kind of boredom with a passion.
3. What is your favorite beverage?
Freshly squeezed orange juice. Hands down.
4. What is your favorite word or phrase?
“Hmmm,” if that counts as a word.
5. What is your greatest accomplishment (so far)?
That’s a hard one. I haven’t accomplished anything great yet. If anything, it would be that since I decided I wanted to do music for a living, things have actually been coming together — I’ve got a record, I’m performing a lot, I’m starting to garner a little attention. So my greatest accomplishment thus far is taking the first few steps. The journey’s just started.