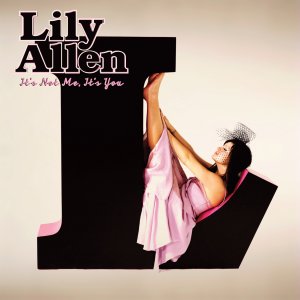 IT’S NOT ME, IT’S YOU, SET FOR FEBRUARY 10th, 2009 RELEASE
On February 10th, 2009, Capitol Records will release It’s Not Me, It’s You, the follow-up to Lily Allen’s critically acclaimed 2007 debut, Alright, Still. Recorded at Eagle Rock Studios in Los Angeles, the album finds Lily in top form, creating a record Blender’s recent “In The Studio” feature described as “part God, part country and all middle finger.” Allen wrote and recorded the album’s 12 songs with producer Greg Kurstin (the bird and the bee), who worked with her on three songs for Alright, Still – Everything’s Just Wonderful, Alfie and Not Big.

“We decided to try and make bigger sounding, more ethereal songs, real songs,” says Lily, who will be touring the U.S. in the spring. “I wanted to work with one person from start to finish to make it one body of work. I wanted it to feel like it had some sort of integrity. I think I’ve grown up a bit as a person and I hope it reflects that.”

On It’s Not Me, It’s You, Lily’s characteristically sharp observations find expression in a variety of musical styles, with influences ranging from the Jazz Era to country and western to dance music. “Highlights include ‘Everyone’s at It,’ a synth-pop song about prescription drugs that features Allen on xylophone; ‘He Wasn’t There,’ which matches emotional lyrics about her absent father to a jazz groove; and ‘Not Fair,’ a saucy country song about an inadequate lover,” said Rolling Stone.

Often called the queen of MySpace – a reference to the massive interest generated by early demos she posted on her page – Lily was hailed by NME as “the archetypal singer-songwriter for the iPod generation” while The New York Times observed, “She symbolizes a new blogging-age, middle-class girl: cockily ambitious, skeptical yet enthusiastic, technically savvy, musically open, obsessed with public expression and ready to fight back.”

After a release week performance on “Saturday Night Live,” Alright, Still bowed at No. 20 on The Billboard 200 in February 2007. Certified Gold in the States, it has sold over 2.5 million copies worldwide. Allen, who was nominated for four Brit awards, a GRAMMY® award and an MTV Video Music award, toured the U.S. numerous times and appeared on “The Tonight Show with Jay Leno,” “The Ellen DeGeneres Show” and “TODAY.” A succession of collaborations with artists including Robbie Williams, Mark Ronson, Common, Dizzee Rascal, Jamie T and the Kaiser Chiefs further enhanced Lily’s reputation as an artist of unusual diversity. The track listing for It’s Not Me, It’s You is as follows: