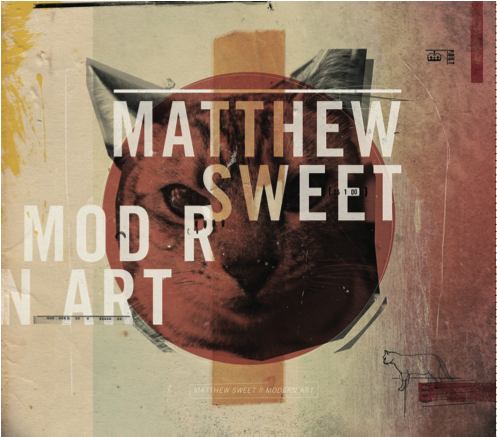 Throughout a career that stretches back to the mid-‘80s, Matthew Sweet has never followed trends, though his landmark 1991 album Girlfriend was responsible for starting one: in fact, many critics note that most power pop records made during the ‘90s owe a tremendous debt to Sweet. Two decades after the release of that iconic album, Sweet has once again swung for the fences – and connected – with the boldly experimental, yet deeply personal Modern Art.

Defiantly unorthodox, but often playfully so, Modern Art features 12 new compositions of Sweet’s trademark wistful, yearning pop that recall some of Sweet’s touchstones: the Beatles, Beach Boys and Big Star. “She Walks the Night” is reminiscent of early-period Byrds, while “Ladyfingers” stomps along with the authority of T. Rex. Other standout tracks include the swirling, psychedelic “Oh, Oldendaze!,” the ruggedly assertive “Late Nights With the Power Pop,” the acerbically witty “Evil By Design, Goodbye Nature” and the sweetly soulful “Modern Art.”

For this record, Sweet discarded his normal process of laying down ideas as they came to him and shaping them into songs. Instead, he allowed these spontaneous kernels of music dictate the direction of each piece. “In the past, I’d make deliberate changes of structures and normalize things, but this time, I wanted to make it abstract but still human and natural.” He reflects “That approach gave it a super-personal feel that was really melodic and musical but still different, so I ran with it. And in an odd way, this record feels more like me than anything I’ve done.”

Longtime musical cohort Ric Menck (Velvet Crush) does all the drumming on the album (except for “Ivory Tower,” which is built on a random drum pattern supplied by Sweet’s friend, actor/musician Fred Armisen). Dennis Taylor’s deft and urgent guitar lines serve as a running commentary to Sweet’s introspective singing.

Sweet expounds on the genesis of the album’s title: “I first wrote down the phrase ‘modern art’ as a possible song title, and it struck a chord with me because of its similarity to ‘modern heart’ – like a stare-down between the strange newness of time and the living and feeling-filled but surely doomed heart.”

Modern Art’s inventiveness extends to its final stages: mastering engineer Glenn Schick employed his unique “triple analog” process, whereby the masters for the album were cut to virgin lacquer acetates and meticulously transferred back to digital, resulting in a rich, full-bodied, “vinyl” sound. “It’s not too loud, because we wanted to allow the dynamics to breathe,” Schick explains.

Modern Art will be available on all formats (vinyl, CD and digital) on September 20, 2011. The vinyl version of the album will feature an exclusive bonus track, “At the Screen (With the World Flowing In)” as well as a digital album download.

[I will post links to purchase just as soon as I have them.]